I’m in the current village pantomime (the above is a shot from the 2013 one). We’ve had two performances last week and we are entering our final run from tomorrow (Thursday, Friday and twice on Saturday. If you are interested click on this line          ) .

It is part of the tradition of villages round here. In the past, several put one on in the period from January- March and people from different villages would go from panto to panto. Now, a lot have died out although some still remain. I’m biased, but I think ours is one of the best (I really think it is the best, but I’m trying to be modest): six paying performances and around 800 ticket sales in a village of 1800 people is pretty good (even if a fair few people come from the areas around to watch it).

It knits a community together. The sight of people known in a community parodying their own roles is part of the warp and weft of community life that ties people together: it stops us being atomised individuals. As it is a form- pantomime- with set rules and rituals, audiences generally come together not just to watch but to take part. At its best , the ‘4th wall’ is knocked down and we become ‘we’ and not just a collection of individuals.

It gives people a chance. There are some very talented amateur actors of all ages who take part, but there are many of us who do not fall into that category: for some it might be their first time on stage. Conversely it might be the last time they ever do this, which is fine; they’ve had a go. It gives non actors with little talent like me, the chance to fulfil childhood dreams.

It is an exercise in temporary community. I think that we only ever truly know ourselves when we are part of something: I never quite got on with the Cartesian ‘I think therefore I am’. There is something powerful and lovely when people come together to produce something greater than themselves (and sometimes argue and fall out: that is part of community).

It involves ‘buy in’. Society seems to be going further down the route of ‘I consume, therefore I am’. Something like this-like any voluntary activity- involves ‘buy in’: you are no longer on the sidelines, watching, but you become involved. Some people go through life never being involved, but only buying; life seems richer when you take part in something and ‘give’.

It is fun. Yes it is hard work whether up front or behind the scenes (more so the latter, I think), but it is also a lot of fun. It is ‘democratic fun’ as well: apart from the £10 membership fee, it doesn’t cost anything so anyone can take part. I’m sure Douglas Coupland in ‘Generation X’ wasn’t thinking about village pantomime when he wrote ‘Purchased experiences don’t count’, but he could have been.

I could give many, many more reasons, but I’m due on stage, dahhrlings… 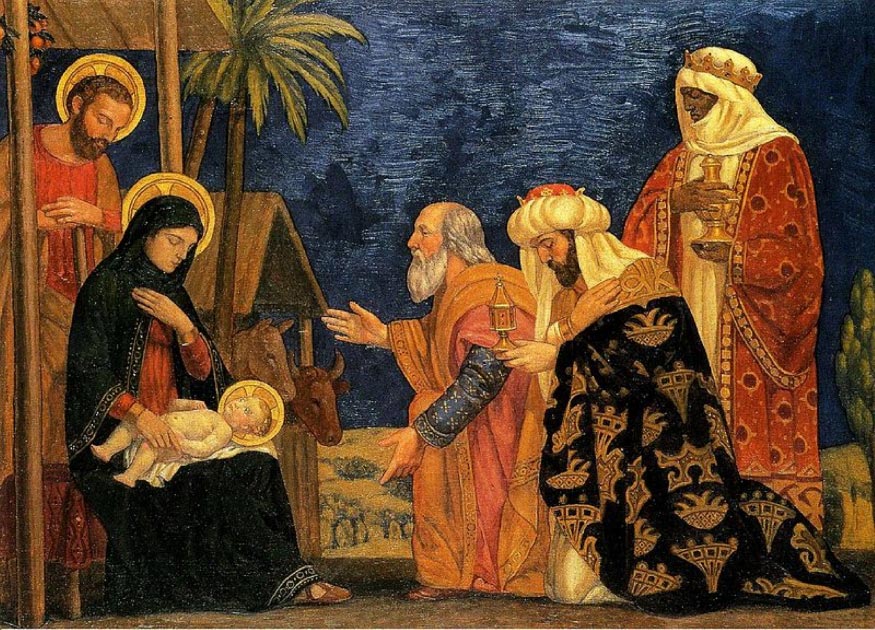 Today does not feel like an epiphany moment. I guess many of us feel the dulling sensation of having to get up early, go out into the dark and go back to what we left a week or two ago. I’m fortunate; I love what I do, but this day- this dark day- of getting back to ‘normal’ always feels hard.

Epiphanies tend to be imagined as happening when we have some kind of serenity or stillness; when everything feels ‘together’ or calm; not dark, cold or tired (It still irks me when I hear a preacher say ‘Let’s seek God in the silence’: I want to say ‘Is he not in the noise, then?). The formality of the above picture doesn’t help: I like the TS Eliot poem ‘The journey of the Magi’ better.

Years ago, the story of the 3 wise men seemed simple & they seemed bland (most parts of the nativity story read back through the lens of school nativity plays do); it now seems really complex. I guess that many reading this will know there is no number mentioned, they weren’t kings, they were likely to be a type of astrologer and probably Zoroastrian (You’ll recall that Freddie Mercury had a Zoroastrian funeral; I’ll bet though that they weren’t as good at singing or had such voracious sexual appetites..): everything that is an anathema to your good and faithful Jew like Matthew who wrote the story down (or maybe created it to make an important point).

Anyway, they come into the story, meet Herod, find Jesus…and leave…. and that’s it: the rest is unknown- they seem like bit part characters.Well; it is not strictly it, as their interventions lead to a massacre of small children. That’s the bit that is sanitised out of nativity plays and most Christmas services:  it’s a pity as I reckon if it was in the depiction of Christmas in Western culture it would be less sanitised, more gritty and truer to life. Grubby realism, questions, suffering and pain are never far away in the Bible; most of us filter them out.

This got be thinking about epiphanies: maybe they happen just as much in the noise, confusion, darkness and uncertainty of everyday life as in those rarified moments when everything is still and ‘connected’. Perhaps like the Magi, that tends to be partial and uncertain: we don’t know where they went to or what the result of this epiphany was for them.

Often epiphanies may come through situations where we are profoundly uncomfortable and we don’t know the way. Also; an epiphany might not be in any sense a final breakthrough but be just enough light to go on with now….the darkness will still come back, but that faint sense of hope may still linger-there may well be a new direction, but it is still hedged with uncertainty and can be painful. It can be that ‘epiphany’ is only grasped in hindsight many years after: at the time it felt like anything but.

I might read this again mid afternoon when all I want to do is sit in a warm room, eat another mince pie and bing on netflix and feel festive….